The Edita Barcelona Forum begins with more than 250 registered participants 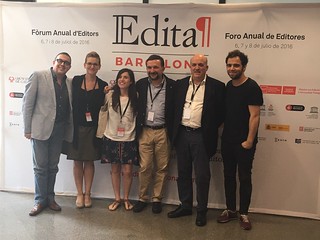 More than 250 representatives of the publishing industry have signed up for the first Fòrum Edita Barcelona, from 6 to 8 July at the UPF Barcelona School of Management. The meeting is organized by the Publishers Guild of Catalonia and Pompeu Fabra University and aims to be a platform for discussing the health of the publishing sector.

The day began with a welcome from the president of the Guild of Editors, Patrick Tixier, and the Director General of the UPF Barcelona School of Management, Carme Martinell. Next, the professor and director of the UPF Barcelona School of Management Master's Degree in Publishing, Javier Aparicio Maydeu, highlighted the effort put into the content of the forum. "The content should always be the added value of any literary genre".  The Forum continued with an exceptional conversation between Richard Chark, President of the International Publishers Association (IPA) and Daniel Fernandez, director general of Edhasa and president of the Federation of Publishers' Guilds of Spain. Can algorithms replace the work of publishers in the future? The debate began with a diagnosis of the situation of the industry, without glossing over the fact that it has lost 40% of its income and many jobs and people, or the problem of piracy. 'It is surprising that the Spanish government is not cooperating more with the country's industry on the piracy problem", said Richard Charkin.

The participants also included students and ex-alumni of the UPF Barcelona School of Management Master's Degree in Publishing, who had previously been able to suggest discussion topics and questions to the speakers. In fact, many of them are already “junior editors", according to the director of the Master's Degree, Javier Aparicio Maydeu.

The event has the support of the City of Barcelona. The Councilor for Culture, Jaume Collboni, stressed that the Forum is the first major event linked to Barcelona's status as a UNESCO literary city. Collboni felt that Barcelona was a literary capital per se in both the Catalan and Spanish languages. He quantified that by stating "50% of the publishing decisions in those two languages are taken in Barcelona and that this should be corresponded, for example, with meetings such as the Fòrum Edita Barcelona.