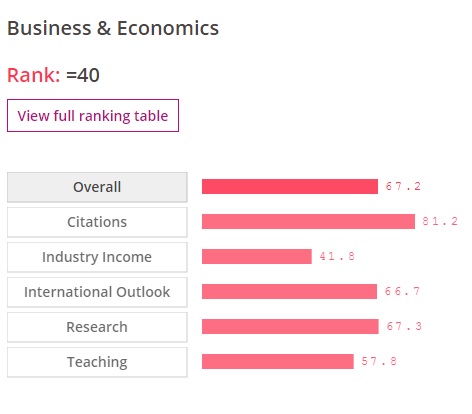 The World University Rankings 2018 by Subject by Times Higher Education (THE) has published the rankings for Business and Economics and Social Sciences, which both include UPF.

The 40th position obtained by the University in Business and Economics represents an improvement of eight places with respect to 2017. It obtained an overall score of 67.2 points, nearly five more than last year, when it scored 62.5.

These results make it the first university in the State in this field, ahead of the Autonomous University of Barcelona, in 92nd place; Navarra (101-125 bracket) and Carlos III of Madrid (126-150).

Among European centres, UPF comes twelfth, one place higher than in the last edition of the ranking, when it came thirteenth.

The weighting system used by the Times Higher Education by Subject ranking is the same as for its general ranking, and is based on thirteen indicators corresponding to five major fields.

Among the world's top 175 universities in the Social Sciences

With regard to the field of the Social Sciences, Pompeu Fabra University is located in the 151-175 bracket, with an overall score of 40.2 points, on State level only behind the UAB (126-150).

Two areas led by universities in the USA and Great Britain

In the field of Business and Economics, the universities that excel in the areas of business and management, accounting and finance, economics and econometrics stand out.

The table is led by the universities of Stanford and the Massachusetts Institute of Technology (USA), followed by Oxford, London Business School and Cambridge, all of them in Britain.

With regard to the Social Sciences, the top five places in the table correspond to the universities of Oxford (Great Britain) and Harvard, MIT, Stanford and Princeton Universities (USA). These centres are notable in the fields of sociology, geography, political and international studies and the subjects of communication and media studies.

The 2018 edition of these two rankings by fields has expanded the classification, which last year analysed 100 institutions. This year, Business and Economics includes 400, and the Social Sciences, 200. For the first time, the disciplines of Education, Law and Psychology are not included in the Social Sciences table, but they are part of three new independent lists.

The World University Ranking by Subject 2018 is divided into a total of ten areas, of which at the moment THE has published the lists corresponding to Law, Education, Arts and Humanities, Business and Economics and Social Sciences, UPF being present in the last three.

The lists for Clinics and Health, Computer Sciences, Life Sciences, Physical Sciences and Engineering and Technology are to be published shortly.