The success of Wallapop: Idea, Team and Funding 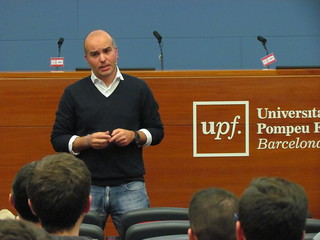 Wallapop is a Spanish app that allows its users to buy and sell second-hand products. Though the second-hand market is not new, Wallapop's format as a mobile service for smartphones is. It is available for both iOS and Android and allows for geolocalized sales, i.e. among people in our vicinity. Today Wallapop has millions of users throughout Spain, France, England and Portugal and figures among the top 10 in the Mobile App Rankings.

'Idea, Team and Funding' identified Gerard Olivé, Wallapop co-founder and board member, as one of the keys to Wallapop's success during a conference organized by the UPF Business Shuttle, which brought together almost one hundred people at the auditorium at UPF Barcelona School of Management and UPF-IDEC.

Opportunity: 'We detected the opportunity, or rather, we saw that the world of classified ads was shifting from a web-based model to a mobile model which allows users to communicate, as in the case of social networks, and we came up with the idea of creating a new classified ad system in a more social, geolocalized environment.'

Team: 'To develop this idea, we created a highly committed and extremely talented multidisciplinary team. A team that believes in the project, gets involved and works hard, each in their area of expertise, so that the project moves forward.'

Funding: 'We had a smooth-running ecosystem in place that provided the resources we needed to expand the company at all times. It's important you don't come to a halt or experience downtime due to a lack of funding, because you lose your competitive edge. As far as funding is concerned, we were never lacking resources, meaning we could attack the market efficiently and with guaranteed success. We invested in online performance media and television, with partners including Antena 3 and Zeta Group. And this helped us to raise our profile and reach the public on a mass scale just at the right time.'

As regards the mix of opportunity, team and resources, Gerard Olivé adds: 'Wallapop is a tool that users like and use. It started out as a classified ad system with a strong social component and has become almost a social trading, sharing and peer to peer network among users.'

As regards the future, Gerard Olivé believes that mobiles are now imperative to any online business, as most users today access the Internet via their smartphones, creating different times at which society consumes.