Population ageing: Does it represent a threat to the National Health System sustainability?

In a single century, humanity has more than doubled its lifespan. While at the beginning of the twentieth century, life expectancy in Spain was 35 years old, in 2018 it was estimated at 83.5. But will we live longer, better lives? And to what extent will this affect healthcare expenditure? The future is not set in stone.

Population ageing is the result of the spectacular growth in life expectancy from 35 years in Spain at the turn of the twentieth century to 83.5 in 2018 (80.5 for men and 85.9 for women). A drop in the fertility rate also occurred as of the 1970s, with migration flows so far proving insufficient compensation for the phenomenon. To have more than doubled our lifespan in a single century sounds like a success story. On average, OECD countries have witnessed a 10-year rise in life expectancy from the period of 1970 to 2017, although the trend has clearly slowed in recent years. 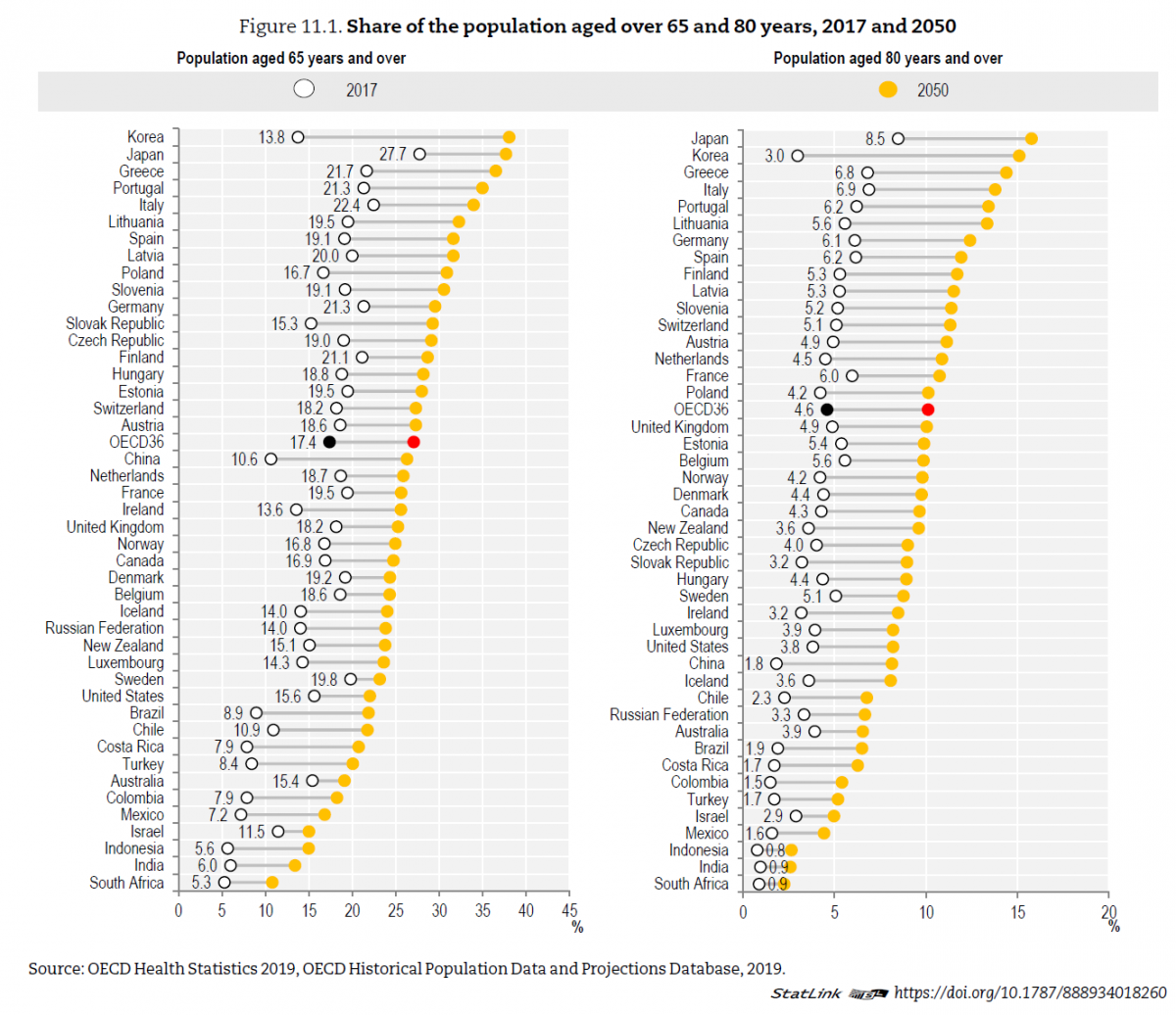 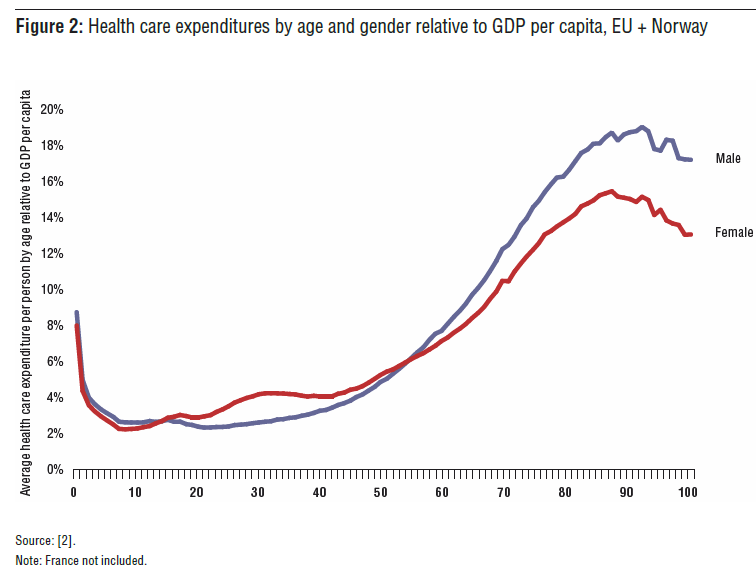 Figure: Cylus J et al. The Economics of Healthy and Activi Ageing. Will Population Ageing Spell the End of the Welfare State? A review of evidence and policy options. WHO, 2019. 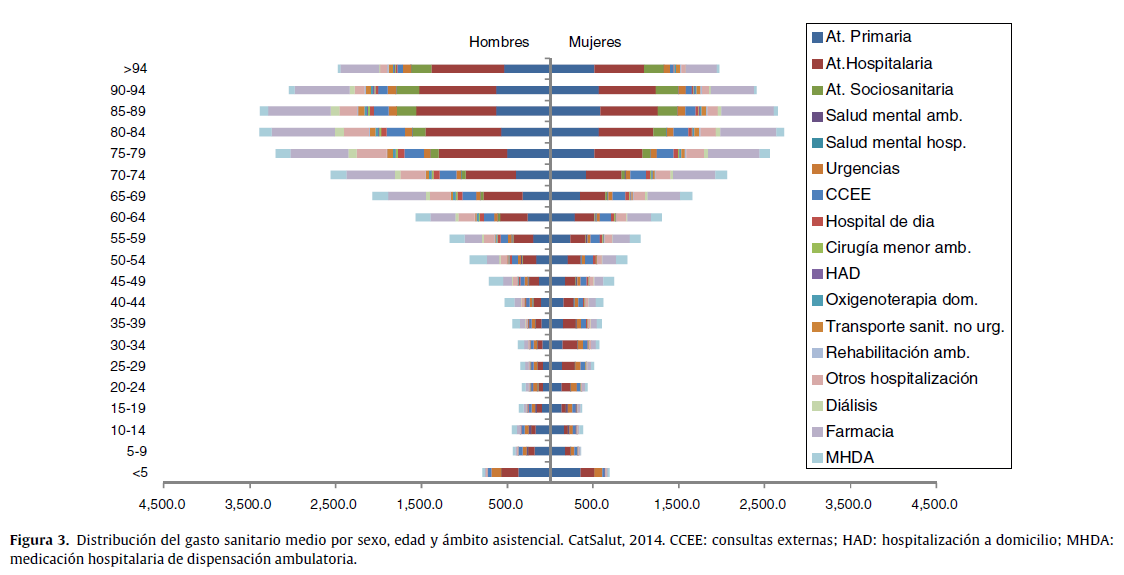 Despite such a narrow relationship between ageing and healthcare expenditure, all retrospective and prospective empirical studies demonstrate that age exerts only a moderate impact on forecasts for future spending. In light of the aforementioned data, it is significant that the Ageing Report – published by the European Commission and featuring forecasts for public spending (on healthcare and other areas) among member countries in the decades to come – demotes the population aspect to a lesser role. According to the Report, public healthcare expenditure in Spain should "only" rise from 5.9% of the GDP in 2016 to 6.5% in the year 2070 due to population ageing effect alone. How can this be possible? Let's take a look.

The fact that healthcare expenditure per person rises in line with an individual's chronological ageing is complicated by something of a red herring, and this is the proportion of individuals in the final year of their lives, for whom expenditure is extremely high, with this rapidly increasing with age. Empirical studies show that once this effect has been controlled, age is an unreliable factor for forecasting the population's future healthcare costs. Closeness to death was a much more relevant variable, with later studies based on this principle revealing that it is not only survival time that plays a part, but also variables such as health, the time since the diagnosis of chronic conditions and age-related deterioration (cognitive deterioration, delirium, falls and mobility problems) that account for increases in healthcare expenditure, reducing or eliminating the impact of age alone.

The conclusion reached by such studies is that population ageing will continue to spur increases in healthcare expenditure according to the quality of life and functional status of the elderly population. The evolution in healthcare spending will thus not only depend on the population's ageing but also on how this is produced (will the sector of the population currently in their 40s and 50s be healthier in 20 or 30 years' time than the sectors currently in their 70s and 80s?) and how other factors derived from attitudes, capacities and needs interact and are reflected in individual and collective decisions. 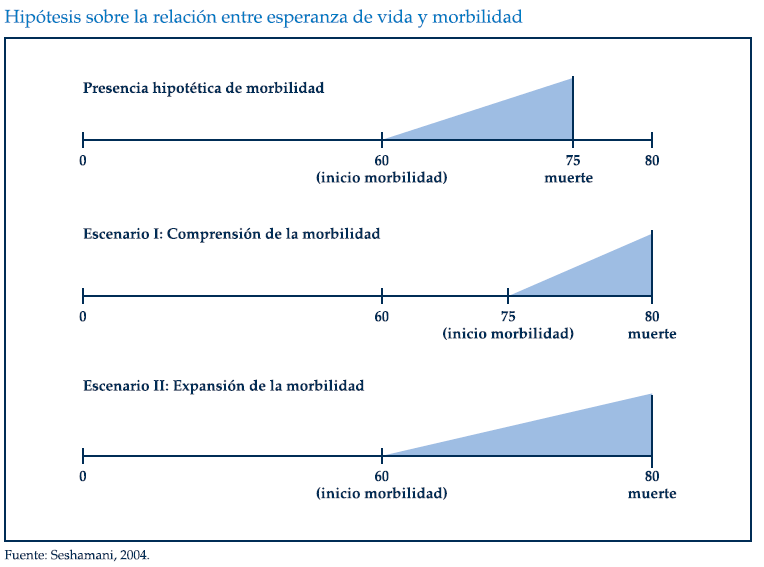 In an OECD review of 12 countries, the rate of severe disability among the elderly decreased in only five countries while it rose in another three, revealing mixed evidence on the expansion/compression of morbidity. Evidence has revealed expansion of morbidity in Spain, with "the increase of 1.6 years in life expectancy at 65 recorded from 2006 to 2016 accompanied by a decrease in the number of healthy life years (-0.8 in men and -1.8 in women) and a rise in the number of years with severe disability (2.4 and 3.4, respectively)" (Abellán, 2019).

In any case, there are other elements apart from population demographics that must be considered in an analysis of the expected future evolution in healthcare expenditure. Some of these factors are largely outside the control of governments and public policies, at least in the short term, as are the strong fluctuations in individuals' health derived from biological, cultural and social factors, the growing expectations of healthcare services or the cost of new healthcare technologies, or the risks of public health crises such as foreseeable epidemics and pandemics, such as but not limited to COVID-19. The World Health Organisation reported in September 2019 (WHO, 2019) that the period of 2011 to 2018 witnessed up to 1,483 epidemic outbreaks in 172 countries. Others, for their part, are indeed better tackled through regulatory changes and targeted policies such as the provision of appropriate incentives for service providers, competition policies in the healthcare sector, the planning of organisational and management structures, regulatory mechanisms and suitable coordination between different levels of healthcare and systems (whether healthcare or long-term care) and the generation and spread of information on the effectiveness and costs of new healthcare technologies.

So will we live longer, better lives? And to what extent will this affect healthcare expenditure? The future is not set in stone. Although it is helpful to examine scenarios that reveal the different possibilities, realities are shaped by the present. It is our individual and collective decisions that will lead us on the path to one scenario or another.