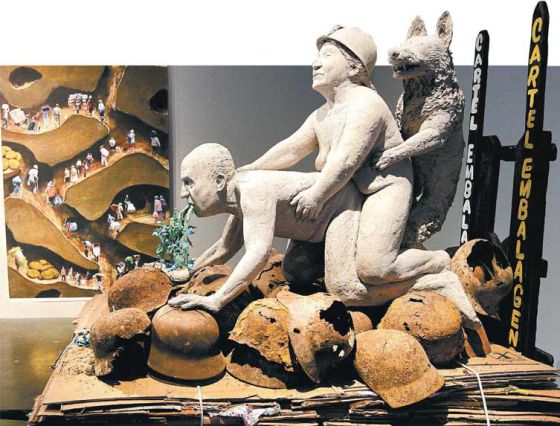 Not Dressed for Conquering, by Inés Doujak, is the title of one of the 31 works from the collective exhibition The Beast and the Sovereign, which, despite the controversy and subsequent resignations, will be on display at MACBA until 30 August. However, controversy aside, what does the work actually represent? 'The work's main character is a historical character, a Bolivian syndicalist, Domitila Barrios, one of the key figures in this Andean country's struggle for democracy. The other two characters, the dog and the king, are secondary and flank the main character. The work is a problematic portrait of a person with historical relevance, though most people, including MACBA's Board of Trustees, seem to have interpreted it as if one of the secondary characters, King Juan Carlos, were the main character', explains Eloy Fernández Porta, lecturer on the Master in Cultural Journalism at UPF-IDEC. As he sees it, this misinterpretation and misunderstanding of the work's main premise sparked a 'ridiculous' controversy ultimately resulting in the 'initial' censorship of the work and subsequent resignation of the MACBA's Director.