In a joint initiative with the Barça Foundation, the BSM 2019 Challenge focuses on society's most vulnerable

As is the case every year, UPF Barcelona School of Management has organised a challenge on Pompeu Fabra University's Ciutadella Campus within the framework of welcoming students to the school's Master of Science and Master of Arts in Communication Management. The goal is to propose innovative projects in which teams of students on different course programs and with different forms of knowledge, nationalities, backgrounds and profiles work together on a single business target.

A total of 10 projects were submitted by teams of 9-10 students for consideration by a jury formed of academics from the Barcelona School of Management and the Barça Foundation team. Under its famous motto, 'More than a club', one of FC Barcelona's main aims is to help change the lives of vulnerable young people by means of sport and sporting values.

In this context, a group of students from various Master of Science and Master of Arts in Communication Management programs at UPF Barcelona School of Management submitted a wide range of proposals to the Barça Foundation team. All of the plans suggested innovative solutions whose goal is to create real, emotional experiences to help the young people connect with others and identify with them. 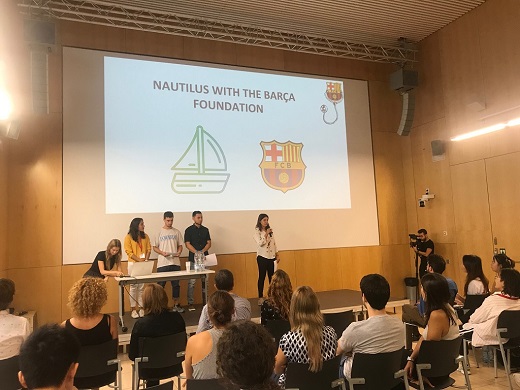 Winning group Nautilus submitted a project involving an app designed to combat the feelings of loneliness, isolation and anxiety experienced by children during long-term hospitalisation. The app would allow them to participate in a series of challenges on the theme of social skills, with interactive games and a chat function for communicating with former patients now in better health, or current patients of similar ages and with similar conditions. The proposal also suggested that each child should receive a personalised ID card and a T-shirt with their number as member of the 'Barça Kids' Club'.

What makes a project a UPF Barcelona School of Management Challenge winner?

Scoring the projects took the following factors into account:

It was with these criteria in mind that the Nautilus project was selected as the winner from the proposals submitted, with the Foundation considering it the most viable and to have been the best consolidated. The judging panel also believed the Nautilus project to be the strongest in terms of its financial planning. As a prize, the group members were invited on a guided tour of the Camp Nou stadium.