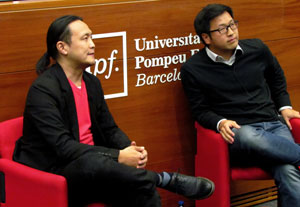 What is entrepreneurship? It is a trend, a need, a vocation... The “adventure of entrepreneurship” was the topic explored by brothers Dídac and Simón Lee when they sat down together for the first time to give a talk at UPF Barcelona School of Management, organized in collaboration with the UPF Business Shuttle innovation unit. “I created my first company at 21 years of age, when no one spoke about ‘entrepreneurship’. I didn’t know I was an entrepreneur; I simply followed my instinct”. Throughout his life, Dídac Lee has created more than 20 companies. Born in Catalonia to Chinese parents, he studied computer engineering and now divides his time between his entrepreneurial activities, which are focused on helping new entrepreneurs, and FC Barcelona, where he is a director and takes responsibility for new technologies. Dídac is also the managing director of Inspirit and a recipient of Cambridge University’s Best Technology Entrepreneur Award. Simón, his younger brother, is a creative designer who has enjoyed a lengthy career in the mobile and videogame sectors. His entrepreneurial activities began in 2002 with the creation of Iverywhere, before moving on to videogame design and later becoming producer, director and head of design at Digital Legends. More recently he co-founded Incubio and createdGamebcn, a startup accelerator focused on the videogame sector. 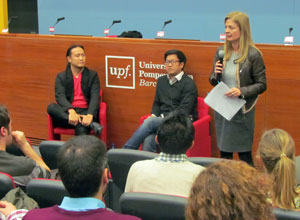 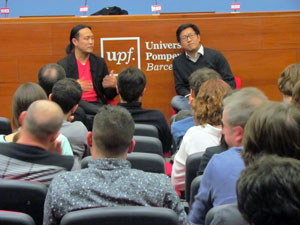 The two men are entrepreneurs by vocation and have enjoyed great success, setting benchmarks in the fields of entrepreneurship, innovation and new technologies. On this occasion they came together to answer the questions raised by an enthusiastic audience. What are the qualities an entrepreneur needs? “An entrepreneur is someone who makes an idea become reality by taking a risk”, affirmed Dídac. “Entrepreneurship has no rules or templates. You need hunger, optimism, effort and determination. But there are three particular qualities that entrepreneurs usually possess: they are independent; they are able to make decisions; and they are able to recognize their mistakes and correct them quickly, which means they can build close relationships with clients”, he explained. “The most important thing is speed”, Simón added. “Don’t go round in circles thinking about the same idea; you need to jump in, see what happens and correct what doesn’t work”. Both brothers agreed on the importance of maintaining focus. “Setting up a project has different stages, and it doesn’t make sense to think about the marketing when you’re still in the creation stage, or to look at the business plan when you still don’t know the hows and whys. Maintaining your focus is the hardest part because throughout the journey there are ups and downs and a multitude of risks, so you always need to remember the objective and be aware of the stage you’re in”. So is getting funding a consequence or an aim of entrepreneurship? “Money always clouds judgment. Economic need fosters creativity. If you get a million euros in funding, the team relaxes. That always happens. Attracting a business angel should be the consequence of doing something well, and not your reason for doing it in the first place”, explained Dídac. “Many companies lose their focus when they start to gain business and if they started out wanting to sell t-shirts, they end up selling apples”, he continued.

From an entrepreneurial perspective, an investable company, a startup and an SME are not the same thing”, Simón added. What’s the difference? A startup is not the same as opening a greengrocer’s or a Chinese restaurant, which have an established business model, a known customer base and a known product. A startup means validating a new business model with a new product or introducing an application that’s different to what has come before. When everything has been defined and proven to function, then the startup becomes a company”. He gave the example of Twitter, which began as a startup and is now one of the largest Internet-based companies. How can you be an entrepreneur on a shoestring? “You need to work hard and choose your team well”, the brothers stated. “If a company has 1,000 employees and hires the wrong guy, it’s not a problem. But if a startup has only four employees and one of them isn’t the right person for the job, it can cause the whole project to fail. You need to hire well and build a committed, multidisciplinary team”. How do you hire the right person? Today we hear a lot about aptitudes such as commitment, trustworthiness, work ethic and proactivity, but these aren’t shown on a CV. “You have to pay more attention to the personal, rather than the professional. For instance, I prefer to conduct job interviews in a bar, over a cup of coffee. If the person I’m interviewing is an accountant, I take it for granted that they know about accounting. I trust Human Resources to select candidates with the necessary professional aptitudes; what I want to know is whether I’d want to go to the cinema or have a drink with this person. I want to know if their values are consistent with mine and those of the company, and if they’d fit in with the rest of the team, because I have little use for a professional who doesn’t share the values of the company or who doesn’t work well with everyone else. There will always be better and worse professionals, but the risk of a bad hire is reduced if there is an affinity with the candidate and he or she shares the team’s commitment”, explained Dídac. What can be done to retain talent? “Trust is essential, and to achieve trust you need to have a close relationship with your team. Fostering the corporate culture and encouraging people to work on what they enjoy is fundamental”, argued Simón. “People don’t leave companies, they leave their bosses. Companies must offer their employees a lifetime project, not just a salary. For this reason it’s important to find out about their aspirations and motivations, to value their work and make it compatible with their personal lives. There are no set rules when the key factor - the person themselves - is the variable. You get to know people by working with them”, Dídac concluded. Is Barcelona a good place for entrepreneurs? “It’s the best!”, both brothers enthused. “Great climate, great training and talent, and it’s creating an increasingly more helpful ecosystem, where institutions and companies collaborate with entrepreneurs”, Dídac continued. “And that’s an area we’re working on right now”, added Simón, who went on to reveal that Barcelona City Council has leased the Meridiana dog track to the brothers so they can turn it into a business incubator for the creative and cultural industries. “We want to work with the City Council to make this country’s cultural industry more competitive”, he explained. 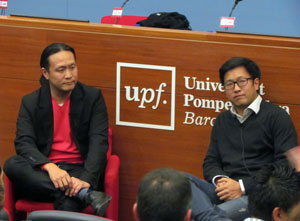 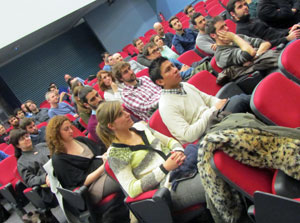 Dídac’s projects are centred around his group of technology companies and his activities with Banco Sabadell and FC Barcelona, along with his interests in a company that promotes hip-hop concerts. “I’m also enthusiastic about a project I can’t yet talk about but which will soon be revealed”, he added enigmatically.