An exhibition to re sprout the meaning of the BAUHAUS 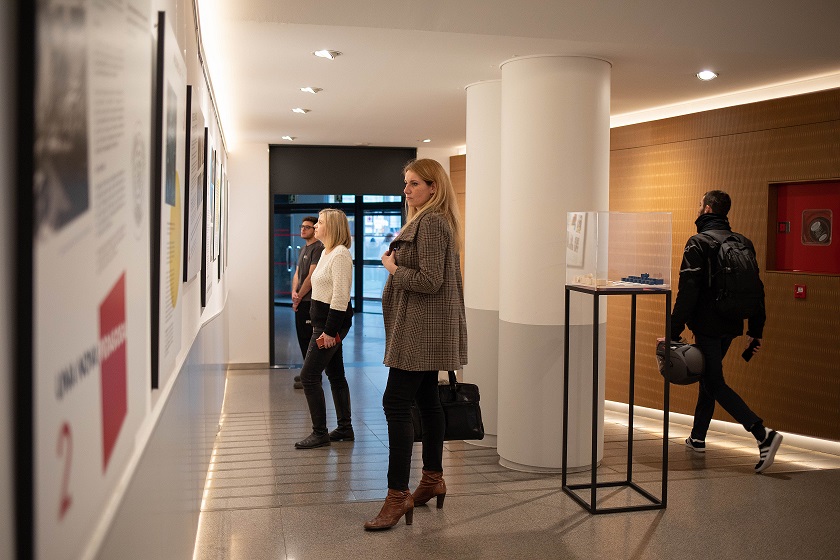 The Staatliches Bauhaus was founded in 1919 by Walter Gropius in Weimar (Thuringia, Germany) as a school of architecture, design, crafts and art. It only lasted fourteen years, but it changed the understanding of architecture, furniture design, interior decoration and urban planning forever.

After its centenary, the UPF Barcelona School of Management has decided to dedicate an exhibition of its own production composed of photographic works and some pieces of art connected to the school of design with texts of Raimon Portell, a National Prize writer for Children and Youth Literature from Barcelona. Portell has condensed the extensive heritage of the Bauhaus into 8 panels that tell us about its origins, its pedagogy, design, color, architecture and the social and artistic movement that it involved.

The project, promoted by UPF-BSM and curated by Mathilde Brodu, stems from a previous initiative developed last year by students from the Faculty of Humanities and the UPF Institute of Culture under the coordination of Professors Tamara Djermanovic and Lina Gorbaneva . In addition to the photographs, the exhibition is composed - among other pieces - by books that have been provided by the UPF library / CRAI and the chess game designed by Bauhaus professor Josef Hartwig in 1923, which has been borrowed by the Mies van der Rohe Foundation.

The Bauhaus school was an institution that would change forever the holistic conception of art, architecture and design, and that, consequently, would display concepts that are currently highly used in other fields, such as 'functionality', 'pragmatism' or 'usability'.

Therefore, the Bauhaus also symbolizes a paradigm shift and an educational transformation. Today, in the midst of the "knowledge society revolution", the education system is again compelled to start a radical reformulation. Pedagogical institutions try to adapt their methodologies and tools to the new necessities of future professionals, and some, such as the Barcelona School of Management, have defined their own educational model.

With this exhibition, the UPF joins the dissemination of knowledge and meaning of the Bauhaus, through its most prominent milestones, for understanding that its conceptual, pedagogical and cultural revolution survives even nowadays and can be an inspirational driving force.

"Bauhaus, the melting pot of modernity" opens on February 17 in the UPF Barcelona School of Management's hall (Balmes St, 132), where it can be visited until mid-May. Afterwards, the exhibition will begin a tour around the different campuses of Pompeu Fabra's University.